When they ask me at the Post Office if my package contains anything dangerous, I never know quite how to answer. It contains books, and if a book isn’t dangerous, then why was it written?
~Karen Oberst 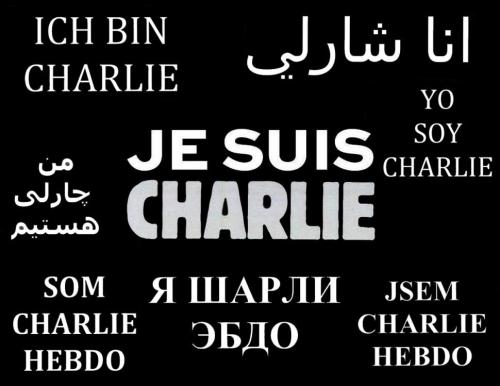 If the Native American saying is true–that it takes a thousand voices to tell a single story–then maybe a mother’s voice from the backroads of Vermont can lend something to this story of free speech.

I entered the conversation with a tweet because I didn’t know what else to say:

12. Terrorist. Paris. Satire. Press. Cartoonists. Religion. Fanaticism. Freedom.
Not sure which point is the sharpest.
#JeSuisCharlie

Later, I shared a Rushdie quote:

The moment you declare a set of ideas to be immune from criticism, satire, derision, or contempt, freedom of thought becomes impossible.

He should know. Remember?
I remember because I was 25 at the time–coming to terms with my own mortality–and feeling particularly unnerved at the thought of a man with a price on his head for writing a book.

Later, I became a writer myself–a memoirist in fact–which brought me face to face with the threat we authors pose. I shouldn’t have been surprised. As a child, I was sent to my prison often–my room–for my mouth. Spanked. Slapped. Silenced.

I grew up passionate about voice.

So passionate, that speaking truth became more important than saving face, or staying safe or even being understood.

Then I had kids.
Fast forward to this week and an argument with my youngest. He’s 14. At times infuriating.

Instead of anger, I resort to sarcasm or mockery. This enrages him. I mock more in defense.

Both my sons tell me that my mockery makes them livid.
I listen to them, and wonder why I do it.
I never used sarcasm and such as a teacher. I knew it was toxic, particularly for adolescents.

I probe a bit and discover that underneath the mockery is my fierce need for boundaries and non-violence.

He reminds me that mockery and power share some poignant history for me. We recall the time, when at 18, I stood up to my father’s tyranny by mocking his orders. At his 6 foot 4 to my 5 foot 2, mockery was my only weapon.

He knocked me to the floor.
Three times.

I don’t see the world in good and evil; and so what I’m trying to understand is what possesses three men to bring automatic rifles into an editorial meeting to execute cartoonists.

But then I remember that even my mild-mannered husband has been provoked to violence by words. How as a boy, he once said to his mother: “Words hurt more than hitting.”

I’d like to figure out how to set boundaries with the men in my life without mockery, how to engage them in what really matters without provocation; but the bottom line is that I can do both–mock and provoke–without giving permission to violence.

“Free speech is non-negotiable,” tweeted the organization Index on Censorship.

“We are all just prisoners here, of our own device,” sing the Eagles.

I’m developing a deepening appreciation for satire. For its comic relief. For the way it softens the unbearable. Illuminates the densest of matter.

I think maybe humor is the path to the future.
But only the humor that I like.

“Humor that offends absolutely no one is not humor,” writes Andy Borowitz, about Paris.

I’d never heard of satirical magazine Charlie Hebdo before today, and I doubt that I would appreciate the tone of their work.
But I am in the middle of reading Salman Rushdie’s, Haroun and the Sea of Stories to my second son; and when I delightfully discover that this longtime favorite has been selected by Vermont Reads as the state book of the year, I dispatch a digital copy to my sister and her family who are living in Cambodia as missionaries.

Now I cringe when I read what Rushdie has to say about yesterday’s tragedy, imagining how those words would feel to my sister and her husband. Not necessarily the disrespect part, but the “medieval form of unreason” part:

Religion, a mediaeval form of unreason, when combined with modern weaponry becomes a real threat to our freedoms. This religious totalitarianism has caused a deadly mutation in the heart of Islam and we see the tragic consequences in Paris today.

I imagine he knows what he’s talking about, given that the Ayatollah of Iran put a fatwa on him, but I also know that the heart of those in love with the Divine can be pure; but maybe that’s different than religion.

BBC presenter Simon Schama tweets: “Satire was the father of true political freedom, born in the 18th century; the scourge of bigots and tyrants. Sing its praises,” and I think he’s right, but maybe now we need a mother of freedom too. Both fierce and gentle.

Mothers talk to your sons.
Men give your women voice.
Children, demand it.

“They thought that the bullets would silence us,” spoke Malal Yousafzai of Pakistan, the youngest recipient of the Nobel Peace Prize. “And then, out of that silence came, thousands of voices.”

May our voices join to tell this story and make it new.

Yesterday, I wrote a post entitled, “Which Wolf? so named after the Cherokee story which asks us to ask ourselves:

Which wolf do I feed?

I love the surprise ending of that story, and the affirmation that as a “good” girl, I’ve spent most of my life feeding the wolf described as:  “joy, peace, love, hope, serenity, humility, kindness, benevolence, empathy, generosity, truth, compassion and faith.”

But I’ve learned that there is a cost to ignoring the “bad” wolf inside, with its feelings of: “Anger, envy, jealousy, sorrow, regret, greed, arrogance, self-pity, guilt, resentment, inferiority, lies, false pride, superiority, and ego.”

When I feed “good” feelings, while neglecting “bad” ones,” I create imbalance, and in this imbalance, I suffer or make others suffer.

Which makes me wonder, was Richard’s act a result of feeding the wrong wolf or of ignoring it?