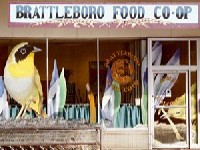 When something as terrible as a murder occurs in a place that we least expect it, it’s no wonder that fear and vulnerability and anguish lead us to blame.

We are human after all, even in Brattleboro.

This tragedy does call into question so many things, that indeed should be questioned:

Why did we grieve the second murder but not the first?

How can we claim to have such a strong community when we kill each other?

What could we have done to make a difference?

What could the Co-op have done?

I felt compelled to write about this tragedy when I discovered that someone I knew had been taken into custody.  I continued to write each day after, trying to make sense of how this happened. As the days passed, the comments grew, and it is the readers who grapple with this question; and I watch, ever so slowly, as grace and grief are replaced with blame. It is my teenage son who labels it so.

“Did you ever see the South Park episode when a house is burning down and the community stands around asking what happened?” he said. “The kids tug on the parents, saying–Shouldn’t we help?  But the parents answer–No, the important thing is to find out who is to blame.”

I think it’s good to tell each other who we blame, for no other reason than to let it drain from our minds so that we are better prepared to help.  But our blame must be conscious in order to be healing, otherwise we will dwell in it at the expense of actually doing something to make things better.

Hindsight makes it easy to blame as is evidenced by the subtext of the readers’ comments I see:

If only Michael Martin had never been hired.

If only Richard Gagnon had been fired a long time ago.

If only the Co-op had done something to mediate sooner.

It is only natural that we want to find someway to escape this pain, and blame is a strong distraction.

“Captain Hindsight always appears just in time,” my son says, recounting another South Park episode. “He’s the Super Hero who tells people what they did wrong and how they could have avoided it. This makes people feel better even though it doesn’t change anything.”

But the truth is that there is no escaping grief if you intend to heal; and if you don’t, you add more suffering to the world.

2 thoughts on “Blame and Hindsight to the Rescue!”