Okay, I was wrong. Frisbee players aren’t all pot-smoking loafers. In fact, when the family and I took the long drive up to the Northeast Kingdom to check out the Vermont State Championships, we were delighted by the positive energy on the field.

Actually, there were surprisingly several fields–upon which several teams played at once–each with its own entourage of tents and coolers and water jugs and nomadic fans–who packed up the belongings and moved at the end of each game , like a caravan through the desert, though this was the lush, green hills of the northernmost part of the state, approaching the Canadien border.

Who knew there were so many highschool Ultimate Frisbee teams in Vermont–28 represented today!  What struck me most about this spectacularly coordinated event was the air of festivity–as evidenced in the joviality of the players–with cheers and antics and most notably–song. Teams actually sang to one another. It was a bit like Monty Python meets Morris Ale meets the pasture–rolling hills and fence posts and the like.

That said, the team playing against our own Brattleboro Honey Badgers was–intense–with several highschool-aged coaches & the like about to burst an artery–while screaming at their own players. Not only did they lose, by quite a bit, but they got a zero from our team for “Spirit”–on a scale of 1 to 5.

Yes, there was actually a score for “Spirit,” which provided yet another facet to appreciate about this sport that I had once pooh-poohed. In fact, each team was to assign a “Spirit Captain” who was provided a special cap to identify him to others, as he was to receive “amnesty from coach-wrath when correcting a coach or team’s actions.”

The Captain’s role was to ensure that his own team was “playing fair, keeping language in check, not spiking the disc, and most importantly–not making calls from the sidelines.”

Alas, the Badger’s didn’t have an official coach, just one of their own players, and neither were they sanctioned or supported by their own highschool, though not for lack of trying. The kids did it all on their own under leadership of a couple determined seniors–scheduled practices, arranged fields, ordered uniforms, provided their own transportation to games and tournaments–like this one–a 4 and a half-hour round trip.

While at first the Honey Badgers were frustrated not to receive the same benefits that the football or the baseball or even the tennis players might ultimately, I think, they enjoyed their freedom. There were no eligibility requirements (like grades or behavior), or mandatory practices, and they had fun with their uniforms–choosing odd numbers (like 666) and odder names (like Midnight, Sauerkraut, Cowgirl and Spaghett.) 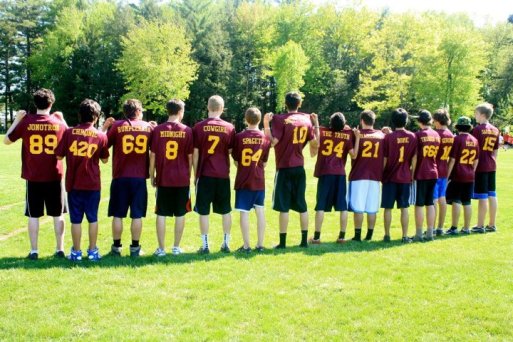 While the intensity of opposing team blew away any thoughts I had of frisbee as entirely laid-back,  there was a game going on behind us with another team from our neck of the woods–a private school known for independent thinking (and very limited competitiveness)–who could be overheard gently shouting, suggesting really, “Be aggressive,” as if they weren’t sure it was at all necessary (or possible.)

Our own team had a similar friendly edge, for when their game point was contested, they  eagerly acquiesced–just to be able to play a bit longer.  This afternoon in Lyndon, Vermont was the last time on the field for the seniors on the team,  and all of the Honey Badgers were eager to hold on to what they created together, with little acknowledgement to the day of wins.