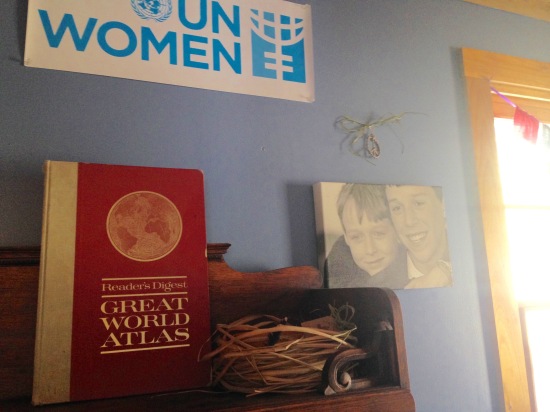 Twenty-three years ago, I took a big pay cut and moved to Vermont. Another year later, I surrendered that income to invest myself in motherhood–because unlike work and success and travel, motherhood hadn’t come easy to me.

As a stay at home mom, I couldn’t afford to go out for coffee. I’m not exaggerating. My husband was a new teacher, and we had to pay for insurance out of pocket, and the cost of living in Vermont was surprisingly higher than New Jersey. I had a college degree and 8 years in the classroom; prefaced by a handful of years managing a restaurant; but I felt compelled to give my all to motherhood just as I had to the endeavors that came before it.

More than a decade passed before I let some other interests back in. My sons no longer needed me in the hour to the hour, but I was terrified of awakening passion for something other than them. I played it safe, in part-time roles, and little by little my sense of a separate self began to re-emerge.

More than anything, I longed to travel–to know myself in some foreign place again–but another decade passed before I left the country; unless you count crossing the border of Vermont into Canada; which admittedly was a huge thrill–all three times.

I was approaching 50 when I was offered another safe, part-time position, in a tiny rural office. I almost fell out of the interview chair, however, when I was asked if I had a valid passport. 5 months later, I was in Chile. The following year, Japan.

Surprisingly, it was my stay-at-home grandmothers who planted the seed of travel in me. As a girl, I sat at my great-grandmother Mildred’s knee, and watched as she brushed her hand across the cover of her huge atlas, turning page after page, as she pointed–to all the places she had traveled with her husband after his retirement as a Merchant Marine.

Her daughter, my grandmother Lila, dreamed of leaving home and working internationally. She confided this while helping me with my French, after I told her about the thrill of a school field trip to the United Nations.

“I wanted to be a translator,” she said.

I’m 52 now, and I’ve given up that traveling job for something else.

During my years at home, I discovered what a wise woman once said:

Our true passion brings us balance.

Even though I did it so well, and gave it my all–managing a restaurant and a classroom and a home and a non-profit, none of these were my passion.

I was the last to realize my own.

Others called me a writer first.

For the past few years, I’ve dedicated myself to the page. I can afford a cup of coffee now, even lattes, lots of them, but not much else. My husband is still a teacher and we still have one son at home. The other is abroad, living the life I once knew.

I’ve begun to miss the world.

Once a year it comes to me.

(The 60th Commission on the Status of Women at the United Nations; click here)